The mayor of Waynesville, Missouri, on Thursday signed a proclamation recognizing the upcoming 30-year anniversary of Missouri’s designation of its 307 miles of Route 66 as a historic district.

Mayor Luge Hardman’s proclamation stated: “We proudly celebrated the Highway’s rebirth then and we continue to celebrate Route 66 now, as we build our town and community around its rich history as the Birthplace of the Byway.”

According to a news release about this week’s event:

Five years after U.S. 66 was decommissioned, on July 10, 1990, Missouri became the first state to award the highway historic status.
The legislative bill was sponsored by Missouri State Representatives Jim Mitchell of Richland and J. Dan Woodall of Springfield. It had won unanimous support in the General Assembly.
The bill was signed by Governor John Ashcroft during a ceremony at the Pulaski County Courthouse in Waynesville. At the time, Mitchell noted that it was a historic day for Pulaski County because it was the first time a bill had been signed there.
On the day of the signing, Governor Ashcroft said he hoped the official designation would stir nostalgia and recreate interest in Route 66 and the small towns along it.
Governor Ashcroft’s prediction nearly 30 years ago has been realized. Missouri’s recognition of the Mother Road helped to spur the Route 66 revival.

Ashcroft drove Mitchell’s 1961 Chevrolet Corvette to the signing ceremony in 1990, as well.

Here’s a clipped photo from the Springfield News-Leader of Ashcroft at the event: 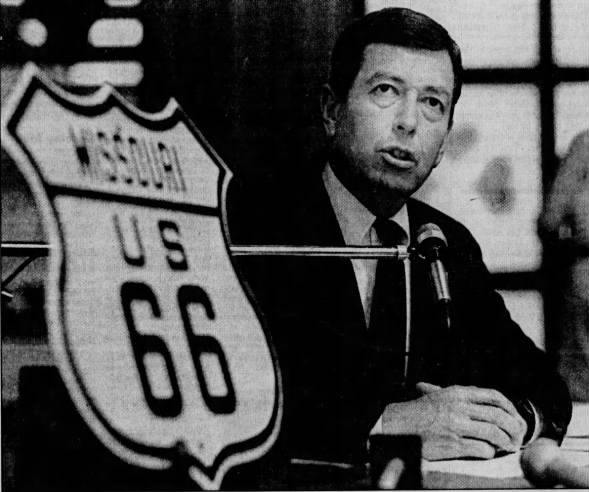 The designation at the time meant the historic route in the Show-Me State would be marked showing the old black-and-white U.S. 66 shields on a brown background.

Missouri claiming it was the first state to give Route 66 a historic highway status might be dubious, however. The Arizona State Transportation Board designated several sections of old U.S. 66 as Historic Route 66 in 1987, thanks largely to the efforts of Angel Delgadillo of Seligman. The celebration of that designation led to the first annual Route 66 Fun Run car cruise in 1988.

Mitchell also attended the proclamation ceremony Thursday. He said: “The historic designation of Route 66 in Missouri is still having a positive impact on the small towns and cities along Route 66. I get a kick out of seeing folks from around the country, and the world, getting their kicks on Route 66 in Waynesville.”

(Image courtesy of Laura Huffman and City of Waynesville)